How to talk to your kids about divorce or break-ups

When you and your partner have made the decision that it’s time to call it quits, the next step is figuring out how your new way of life will work around your children. “If you decide to break up you are still in a relationship together for life [when you have kids],” says relationship therapist Andrew Fitzpatrick of Access Counselling clinic. “As shared parents, the couple needs to respect each other, communicate their wants for the kids, and support one another for each other’s own down time.” Read full article on HerFamily.ie 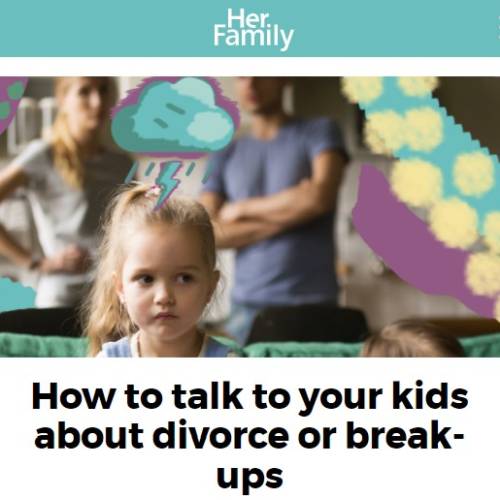 Andy Fitzpatrick – How To Talk To Kids about Separation

There’s been a 30% rise in separation and divorce cases in the past year, break ups are already difficult, but when kids are involved you have another set of feelings to consider and worry about. Jen spoke to relationship therapist Andy Fitzpatrick of Access Counselling Clinic about how to talk to your kids about separation. Listen to JENNIFER ZAMPARELLI show here.

Beth regularly contributes to Irish Newspapers, radios and television. Below is an example of some of these.

“That bundle of Joy can strain your marriage“, Irish Independent, May 30 2007

“Logging on to discover it’s over” Belfast Telegraph, Tuesday March 18 2008

We use cookies on our website to give you the most relevant experience by remembering your preferences and repeat visits. By clicking “Accept All”, you consent to the use of ALL the cookies. However, you may visit "Cookie Settings" to provide a controlled consent.
Cookie SettingsAccept All
Manage consent

This website uses cookies to improve your experience while you navigate through the website. Out of these, the cookies that are categorized as necessary are stored on your browser as they are essential for the working of basic functionalities of the website. We also use third-party cookies that help us analyze and understand how you use this website. These cookies will be stored in your browser only with your consent. You also have the option to opt-out of these cookies. But opting out of some of these cookies may affect your browsing experience.
Necessary Always Enabled
Necessary cookies are absolutely essential for the website to function properly. These cookies ensure basic functionalities and security features of the website, anonymously.
Functional
Functional cookies help to perform certain functionalities like sharing the content of the website on social media platforms, collect feedbacks, and other third-party features.
Performance
Performance cookies are used to understand and analyze the key performance indexes of the website which helps in delivering a better user experience for the visitors.
Analytics
Analytical cookies are used to understand how visitors interact with the website. These cookies help provide information on metrics the number of visitors, bounce rate, traffic source, etc.
Advertisement
Advertisement cookies are used to provide visitors with relevant ads and marketing campaigns. These cookies track visitors across websites and collect information to provide customized ads.
Others
Other uncategorized cookies are those that are being analyzed and have not been classified into a category as yet.
SAVE & ACCEPT